From Crib To Toddler Bed... To Infinity and....

By Amy Glass February 28, 2013
So, this weekend, Lil Man decided to climb out of his crib. NOOOOOO!!!!!!!!!! I needed those rails. I needed that confinement. I needed just one...place...that I knew he was safe and away from harm. But alas, the time came that I heard a bump and found him in the kitchen. Sigh... so we changed out electrical plugs and fastened furniture to the wall. I was still going to 'wait and see' if it happened again. But when I saw his leg over the rail, and talked to other mothers, I knew that it had to be done. I couldn't risk him falling and getting injured.

The first night wasn't too terribly bad. There was only about 30 minutes of crying. But Monday, for the first nap without his crib (or pacifier). Yeah, I forgot to mention we took that away also. He only used it in the crib and in the car. And since he slept without it at nap on Sunday (in his crib), we decided to just do it and be done. Anywho, the first nap time rolled around.

Let me say, there wasn't enough chocolate in the world that day. It was not a fun pleasant afternoon for anyone involved. He 'got into' things that I thought he couldn't reach but could. Let's just say that vasoline was involved. He did however nap, but it was short.

I was ready for the 'fight' that night at bedtime. But after about 5 minutes of whimpering, he was asleep.

Tuesday rolled around. I was not looking forward to nap. But thankfully this day was smooth. 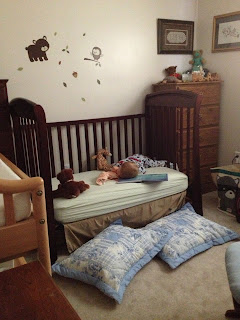 Yesterday, I expected things to be smooth since they were so great on Tuesday. That makes sense right? Well, I heard a 'rip, rip, rip' on the baby monitor. I went to check on things. He had dumped all of his clothes out of his dresser and was tearing the contact paper. Yup!

Today, well today, I emailed my husband threatening to remove every piece of furniture from Lil Man's room. Thankfully, after much instruction on my part, he climbed (and stayed) in bed.

He is enjoying his new found freedom. I have mixed emotions!