When I Met Her She Wasn't My Favorite

By Amy Glass July 24, 2015
At first she wasn't my favorite - we have 3 (dogs). And when I met Sally, I wasn't sure how to approach her because it took her awhile to warm up to me. She kept her distance, even growled a time or two, but she was Hubby's baby. And in time, she became part of my family too. And I learned to understand her, and love her.

We buried her this week. It was a gut wrenching family burial where Hubby wrapped her in an old family blanket that we brought home from Texas, placed her in front of Shorty (her life-long partner) and let him tell her good-bye. And he did. I've never watched a dog tell another dog good-bye before. But he looked her over, smelled her over, looked her in the face, and then stepped back for Hubby to take her. My heart was broken as I watched him. It was almost more than I could take.

Hubby gently cradled Sally's body where he then buried her along with Lil Man's help. 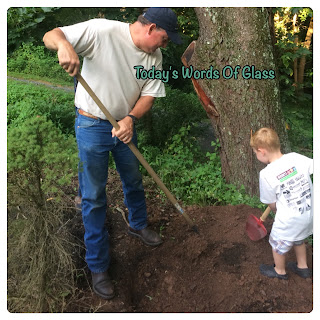 Lil Man has never experienced death. He doesn't understand, and his honest heart-felt questions are hard to answer. He kept repeating "They all old. They all gonna die" (referring to our other two dogs who happen to be the same age as Sally).

Then out of nowhere, he said "I don't have a brudder. Who gonna cover me when I dead?" I can't type those words without tears streaming down my face. At that moment, both Hubby and I lost it.

There has been a constant reminder of the hole in our lives. But out of death I am reminded how precious Life is. The little issues that at times can seem so huge, in reality aren't really that big of a deal.

Spilled milk, broken items, temper-tantrums, battle of wills, and occasional lonliness - all of those things are insignificant.

This week we've held each other a little tighter, extended a little more grace, and loved deeper.

She is gone, but never forgotten. Even in death, she's still with us teaching us about Life. 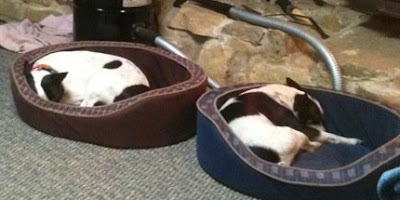