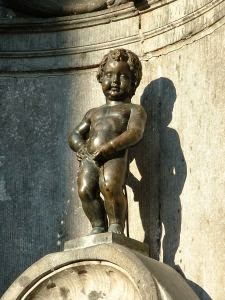 I know it's been quite some time since I've written anything, but who knew that Potty Training would be so time consuming. As many of you know, we've tried several times to potty train. He wasn't ready. I wasn't ready. It just was causing more frustration that I have called it quits more than once. But when he turned 3, we talked about how we weren't going to buy any more diapers. So around his 3rd birthday, Lil Man said, "no more diapes, wear underwear." I said yes.

And that's what we've done... or tried to do for the most part. The first day there was like 6 accidents. The problem is that he doesn't want to stop doing whatever it is that he's doing to go to the potty. And we have a very busy schedule, and I didn't want to put him back in pull-ups, but I couldn't just take him in underwear either. So another mom suggested that I put the underwear on him, and then put the pull-up on top of it. And that's what we've done.

And honestly, it's been easier out in public (except for the horrible incident at Target.. I'll explain that in a moment), than it's been at home. Because in public, we just go to the restroom. At home, it at times is still a struggle to stop whatever he is doing and 'go' when I know that he has too.

But the first week, I put the underwear on him, then the pull-up, and explained that at school if he needed to go to tell his teachers. To this day, he still says 'no'. But to this point, his pants have been dry. We go before class and after.

But I was having a problem with getting him 'positioned' on the toilet. It was as if I needed to totally undress him to try to get everything angled correctly. One day at Target, he had to go (he asked which he rarely had been doing). So I was so excited that he stated he needed to go. And as he started peeing, let's just say that things weren't angled how they needed to be and BOTH of us were covered in pee. I don't mean a little dribble. I mean, his pants (and shirt), my pants and shirt, and I think possibly our shoes were covered. I of course didn't make a big deal out of it because he had asked to go potty and had 'peed' on the potty.

But here we were walking around target, smiling as if nothing was wrong, and yet we were covered in pee. Yeah, we got some strange looks. After hearing this story, another mom suggested facing him toward the back of the toilet. And another suggested transitioning him to standing fairly soon. I tried the facing toward the back, but that pretty much required undressing him which was a lot of work and time consuming. That method didn't work for us. So we tried the standing up method.

And trust me, this wasn't without trial and error. I think I leave the restrooms cleaner than how I find them because I am wiping down toilets, and whatever else after we use it. But so far the standing up method has worked better for us than the other ones.

At home, well, at home we are trying to aim at a cheerio in the toilet as not to pee on the wall and garbage can (which have both happened today).  Will my bathroom forever reek of pee?

Pooping... well I think he might start college and still want to poop in a diaper! He out and out refuses to poop in the toilet. So he is wearing pull-ups at nap and at night. I'm not pushing the issue. He has tried several times to go on the toilet, but he just prefers his diaper, his privacy, and his way. So for now I'll be happy that most days we have 0 accidents. (occasionally one here and there, but for the most part, we are doing really well. I do have to insist that he go sometimes as he doesn't want to stop doing whatever it is that he's doing to go to the potty).

But I had NO idea that it would be this time consuming. Or that I would be so incredibly happy to see that he was still dry.