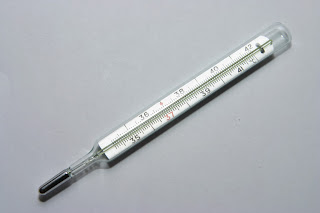 Fevers are scary... or at least they are to me .. especially when I'm inexperienced with dealing with them. After my 20 mile run on Saturday, I'd only been home about 20 minutes, when Lil Man started crying/whining and just wouldn't stop. After about an hour, I noticed his temp was a little over 99. I knew something was up. By night time he had a full blown temperature.

At 1:30am it was the worst. He was in bed with me because his breathing was just too fast for my comfort level. He woke up screaming at 1:30am with a temp of close to 103, and it was too early give him any more meds to bring it down. I know this isn't 'major' for most people and experienced parents. But to us, it was pretty major - especially because he was just crying and we couldn't figure out 'what' was wrong.

We got up and went to the couch where he wanted to watch one of his favorite shows. His fever came down some, and we literally (all 3 of us) laid on the couch watching his cartoons until 4:30am. Finally I got him to come back to bed.

Around 5:00ish, he woke up soaked in sweat. His fever had broke. He did this once more. Thankfully his fever didn't get too much higher than around 101 while he was taking Tylenol or Ibuprofen.

A trip to the urgent care clinic on Sunday showed his ears were fine, his rapid strep was negative (waiting on the culture) and basically it was possibly a virus, possibly not. So we had to just wait it out.

By Monday he seemed fever free. And by today he was well enough to go to pre-school. I'm really thankful he is feeling much better, and that it wasn't anything serious.

Watching your child suffer is one of the most helpless feelings in the world.