Let's begin with yesterday, during naptime (or what was supposed to be naptime), Lil Man pulled his shorts off, his diaper down and peed all in his bed. I will pause a moment for you to catch your breath after laughing. Thankfully Mickey took the brunt of it, and the rest of the bed was dry. After several times being told "Do NOT get out of this bed" he finally napped.

Today, well today, as I was trying to take care of my morning business, Lil Man grabbed the bathroom cabinet door and slammed it into his head catching his brown bone. Sigh. Picture the scene as he is trying to climb up on me as I'm sitting on the toilet. Husband in the shower. Mom on the toilet with a screaming toddler climbing into her lap. Dog sort of running in circles whining at all of the commotion.

One ice pack later, the swelling in his eye starts to subside. Hubby leaves for work. Toddler taunts dog with Eggo, then bread, then cheerios, and at some point a banana. Dog whines. Toddler laughs at making her chase him. 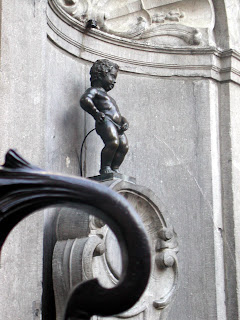 I begin cleaning the house, but also decide to put some training pants on Lil Man. He goes to the potty about every 30 minutes. So far so good. He did poop in his diaper, but that's ok. We are just getting used to the idea of potty training.

The last time he went, I sat him on the potty and let's just say things weren't angled in the way that they should be. (such as down). Granted I'm trying not to make a big deal out of the whole potty training thing, but as pee started spraying all over the wall, it was hard to keep it on the calm side if you know what I mean. (Not to self, always, always, always make sure that it's pointed down).

This is where the open container comes into play. I know that I will regret it later. In my defense, I did reach for a piece of fruit first. I ate the fruit. Then I opened the cake icing. Today was just one of those days where it all caught up with me. The stress of waiting on certain things about our future, a very active (at times) demanding toddler, a house that needs to be cleaned, a dog that was also demanding my attention, and we are stuck at home because the car is in the shop.