When Dining Out Turns Into A Horror Film

We had our first public puking. And it was totally unexpected. Lil Man was happy, playing, and not showing any signs of anything being wrong. We went out to dinner for Father's Day. Lil Man was eating, laughing, and on his 3rd glass of chocolate milk. I know, I know. But he was enjoying himself, and it's not like he wasn't eating his dinner along with drinking apparently a HUGE amount of chocolate milk.

We'd just finished eating our meal, and we were waiting on dessert. Just as the server started to put our ice cream and cake on the table, I saw a little movement from him and knew what was next. But there was no way I could pick him up in time. He started vomiting everywhere. I grabbed a napkin and tried to do what I could without making a huge scene. But let's get real. Everyone sitting around us in Cracker Barrel knew that this kid was puking everywhere. I waited for it to stop coming out of his nose. The poor little guy was gagging so. And I grabbed him up and headed for the door. I knew it wasn't over. I could tell by the way he was breathing there was more to come. I almost (and almost being the most important word in this sentence) made it out the door. 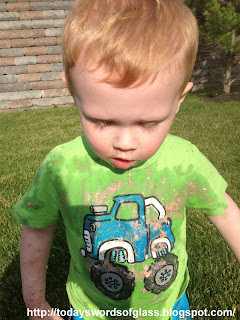 Of course we were seated in the very back. I got through the store and made it to the entry way when he let loose. I turned him into my chest. My shirt and purse took the brunt of it. (My iPhone and wallet also took a direct hit).I got us to the truck, and when I looked down and saw him along with myself covered in chunky puke, I couldn't help but laugh.

Once I started laughing he stopped saying 'uh oh, uh oh'. But when he saw my purse, and especially my wallet, he got a little upset. I heard 'On momma. On momma'. I looked where he was pointing, and saw that my wallet with my license picture was covered in fresh puke. Sigh. I told him it was ok, and started stripping off his clothes. Thankfully his extra set of clothes were shielded by my iPhone and wallet so they were fairly clean.

Poor Hubby had to stay behind and pay for our meal. When he came out, I asked him how bad it was in there. He said pretty bad. People were saying yuck, yuck and they had to rope off the entry way. I felt so bad. And I know people thought that I brought my sick kid out to eat. That was his only time puking. He was fine on the way home, after we got home, and the next day. We must have let him have too much milk.

Hubby did have a to go box with him when he walked out. He made sure they boxed up my cake and ice cream. He knew I was going to need it later. I was soaked through and through with puke. I stripped off my shirt and rode home in a sports bra and shorts with puke bits all over me. When we were half way home, as the puke smell had permeated the truck, I looked over at hubby and said "Happy Father's Day". :) We couldn't help but laugh as my hair soaked with puke hung in clumps around my race. I remember thinking that I am truly a Mom, being soaked in your kid's body fluids, and your first thought is 'Is he ok?'

We are really hoping this is our first and LAST public puking.

(If you could take a moment to click below to vote for me, I'd REALLY appreciate it!)