The Sound Of Silence 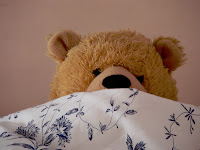 Let's just say that this past week had many many sleep time frustrations. I spent more than one day chunking things out of Lil Man's room into the hall so he couldn't get into it at naptime. Then after the nap that didn't happen, I would have to put everything back into his room.

Finally, enough was enough. This weekend Hubby wired Lil Man's closet door shut so that he couldn't get into it during nap time. And Saturday I hauled a huge cabinet out of there. This momma had reached her limit!

And last night, I let Hubby totally put Lil Man to bed. I didn't 'help' and removed myself before bedtime began. There was a little bit of crying, but then Lil Man settled quickly and slept all night!  I think one of the major problems we've been dealing with is that when he got sick he had a lot and I do mean a lot of time with me. I took care of most everything for him. And after the flu, he's been clingy for me.

So I think with Hubby breaking the 'cycle' last night and putting him down that we are headed (hopefully) in the right direction.

Today, he played for 45 minutes, but since most of the things are where he can't get to them now, he didn't pull everything out and trash his room. Or put it all on his bed. And after playing in his room, he went to sleep. He has slept 2.5 hours and is still sleeping.

So maybe we are getting back on track with our normal sleep schedule. I hope so. I really don't want to repeat last week.