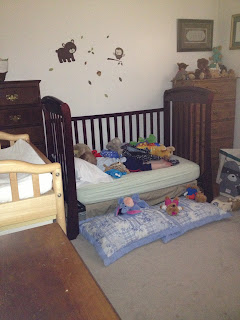 So, we had moved Lil Man into his toddler bed for about a week before the big flu hit. I made it through a week of struggling with naps, but we were finally on a routine. He was napping. He was sleeping through the night. Things were back to 'normal'.

And as we are making our way back to health from the horrible flu, sleeping has been a problem. At first naps were, well let's just say a very unpleasant time for everyone concerned. Lil Man wanted to be held. He expected to be held. He demanded to be held. And when he wasn't held, he was angry. I mean the throwing every book he owns out of his room, banging on the baby gate with such force I wasn't sure it would hold, and screaming until his face was purple anger. And let me tell you this didn't last a few moments. Oh no, this little 'episode' lasted for well over an hour for numerous days.

Finally, Lil Man realized that I wasn't going to hold him while he slept and that he had to nap in his room in his bed. It's still not as easy as before, but he is at least (after 8 days of fighting) napping in his bed.

Bedtime was also a major issue. He would scream and refused to even sit on his bed. He will now go to sleep, but he won't stay asleep. For the last couple of nights, he's up at 1am and screaming. It's taking us about an hour to get him to go back to his bed and back to sleep. I'm not rocking or holding or getting him to sleep, but I am reading a book (numerous times) at 1am. I realize this isn't the best situation, and we are working back toward getting him to comfort himself back to sleep. But at the moment, this is where we are.

And I'm telling myself that we we have to stay consistent. And just like the napping, it took time. And it isn't perfect, but it's much better. Hopefully, the night time sleep will get better also and soon!

We go next week for his 2 year check up (shots! ugh!!!) and to have him rechecked for his pneumonia. I hope these shots don't make him as sick as the last ones did. We still aren't 100% well.