My House Smells of Pickles and Poop

By Amy Glass February 21, 2013
So Lil Man, at almost 2 years old,  is really showing his independence. Just where does he get this stubborn streak?!? Oh yeah... probably from me. My mid-morning started off with me chasing him to change his dirty diaper. I could smell him from across the room. He, however, has learned that if he squats and bounces he can push the poop around and apparently it feels 'funny'. This has become a 'fun' thing to do after pooping. It isn't so much fun for Mommy to clean up squished poop. So I chased him. Caught him. Changed him. Released him.

But then it was getting closer to the dreaded lunch time. I wasn't sure what to feed him today. See, he's been showing some... shall we say... resistance to whatever I give him (even if it is something that I KNOW he likes). Well, he wanted some yogurt. I decided why not and let him have it. He ate 3, yes 3, gogurts and then a small cup of yogurt at 10:30am. I knew this would pretty much mess up lunch, but I didn't want the food fight today anyway.

Then around lunch time, he came and got my hand and pulled me to the refrigerator. (If you've been reading my blog, you know he's a little behind on his speech). He does have a way of getting his point across though. So I opened the frig. He wanted cheese. Really? I have offered him a slice of cheese NUMEROUS times for him to say yuck and throw it 'splat' on the floor. But he kept pointing and I said ok. I gave him a slice of cheese. He took one bite, made a face, then looked at me and ate it. That's right; he ate it.

Well after he ate the cheese, he went back to the fridge and wanted something else. He wanted pickles. Yes, pickles. I debated about whether to give it to him, and then decided why not. I gave him half a pickle. He ate it (with juice running down his arms) and wanted another one. I gave him the other half. He then asked for more, but I cut him off. So his 'lunch' wound up being yogurt, cheese, pickles and a fruit snack. I must say his sticky, yogurt, pickle, fruit smelling hugs were adorable. I'm trying to cherish every one of these moments as he is growing up too fast.

I had to remind myself of this fact when I found this... 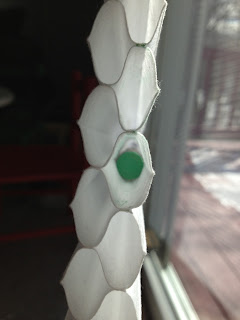 This would be his crayon stuck in my window shade.

There is truly never a dull moment.