By Amy Glass May 16, 2013
I don't know about you, but I have a hard time sometimes not letting my mind 'go there'. You know that place where you just allow yourself to get worked up over usually uncontrollable circumstances.

I'm still concerned that Lil Man isn't talking. Yes, he just turned 2 in March. Yes, we are seeing progress. But there are days that it's more grunt and groan than words. By the end of the day, both of us are extremely frustrated. I discussed my concerns (yet again) with his speech teacher yesterday. She assures me that she really thinks he will get there.

Part of the problem is that I know a lot of times what he wants. And he gets irritated with me that I'm not getting what he wants because he knows that I know what he wants. So it's just easier to grunt right? So... very... frustrating because when I don't immediately give it to him, he gets frustrated and mad.. anyway.. I'm trying to not give in at the first grunt, but trying to get him to say a word. Hey, it doesn't have to sound like 'the word'. But any type of jabber will result in action over a grunt.

And then there are times where he is really trying to tell me what he wants, and I just don't understand. Those moments hurt. I see and feel his frustration, and at the same time I feel helpless because I can't figure out what he wants.

But I have to stop and remind myself that we are seeing progress. He now says about 50 or so words. And some of those words are quite clear and understandable even to strangers. I'm trying not to worry.

For Mother's Day we traced his hands and feet. As soon as we'd finished, I turned around and found him trying to trace his own foot. It was so cute. 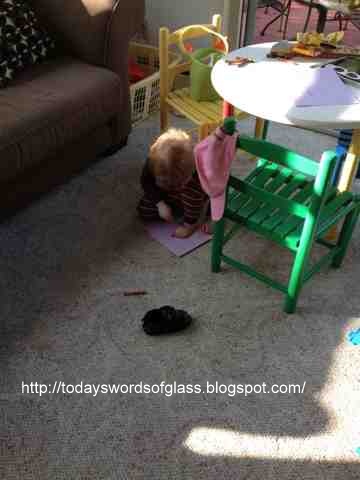 He couldn't quite get it, so he turned his foot over and drew on the bottom.

I had no idea that Motherhood would be so much fun (or so much work). It really does go hand-in-hand doesn't it? I wouldn't trade it for anything.